2012 was the year I finally released ‘Arne Nordheim Complete Accordion Works‘ (Simax Classics), a project I have been working on a few years now. The release was marked with performances of Nordheim’s ‘Spur’ (1975) for solo accordion and orchestra in Norway and the UK. The Norwegian performance is still available on web TV. You could also go directly to the album page on the Simax Classics site. I also joined a few other albums – in Jørn Simen Øverli’s ‘Markaviser‘ (KKV) I teamed up with fellow accordionist and multi musician Stian Carstensen, that was fun! And I recorded a couple of albums that will be out in 2013, stay tuned! Here’s a picture of Stian Carstensen and me: 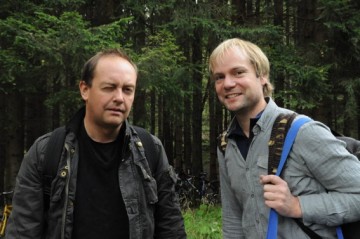 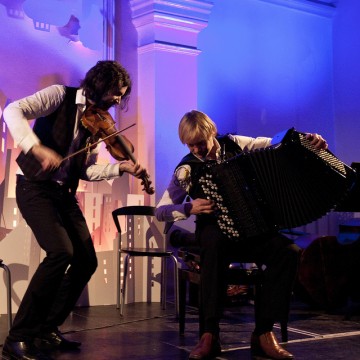 I did several world premiers in 2012. The recording of Ørjan Matre’s “Nephilim Songs” for solo accordion is now available for streaming on the Spanish radio channel RTP. I also presented music by some of the composers I have worked the most with the last years: Bent Sørensen, Hans Abrahamsen and Maja Solveig Kjelstrup Ratkje. Maja and I also composed music for radio theatre: ‘Simons histore‘ (NRK), I also did music with Trygve Seim for ‘Den andre mannen i meg‘ (NRK)

My most exotic trip in 2012 went to Pyongyang in North Korea in May. I was a part in artist and director Morten Traavik’s project ‘Yes, We Love This Country!’. The project gained massive media attention, a fantastic 1-hour documentary was sent on Norwegian State Broadcasting (an international version is being prepared now), and you can see some pictures, videos and text at Traavik’s web page 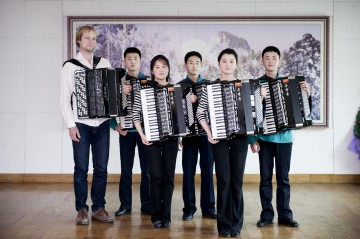 2012 was a very active year for my long-time collaborators in POING (Rolf-Erik Nystrøm, saxophone; Håkon Thelin, double bass). We did tours and concerts as a trio but also several ‘Wach auf!‘ concerts playing revolutionary music with local choirs and singer Maja S.K. Ratkje as well as concerts with other friends and great musicians!

I have a small teaching position at The Norwegian Academy of Music. For the time being I have three wonderful master students: Ida Løvli Hidle, Grzegorz Miszczyszyn and Almir Meskovic.

2012 was also the year I got my new web site. Thanks to André Pahl who programed and designed the page! All the best to all friends of good music in 2013!