3 March 2016 will see the world premiere of a beautiful new work Blissful Pentecost written by Frode Haltli.
The musicians are Frode Haltli, Garth Knox, Vegar Vårdal, Amund Sjølie Sveen. The performance will be held in the Oriel Centre at Dundalk Gaol at 8pm on Thursday 3 March 2016. The concert is free.

The piece is loosely based on tragic fires that took place in the Grue Church Norway and a church in Louth. Frode’s piece is also influenced by the writings of Peter Wessel Zapffe. Zapffe brings this up in his novel “Blissful Pentecost – Four Dialogues with Jørgen”, where the tragic event in Norway is thoroughly described through historical sources, and also serves as the starting point for a philosophical discussion around the Problem of Evil.

The event also marks 10 years of Louth Contemporary Music Society concerts. To thank all our concert attendees, supporters and funders over the past 10 years, this will be a free event. Tickets are free but registration is required through https://www.eventbrite.ie/e/blissful-pentecost-tickets-20830054253.

In Solør, the area where I grew up, a terrible tragedy took place on Pentecost 1822. Between 113 and 117 churchgoers – mainly women and children – were killed when the Grue Church caught fire during the service. The event is, strangely enough, not regarded as an essential part of Norwegian church history. Peter Wessel Zapffe brings this up in his novel “Blissful Pentecost – Four Dialogues with Jørgen”, where the tragic event is thoroughly described through historical sources, and also serves as the starting point for a philosophical discussion around the Problem of Evil.

A more violent event took place in St. Peter’s Church in Drogheda, Ireland, in 1649. Oliver Cromwell’s Parliamentary forces burned the steeple of the church where about 100 people had taken refuge. Cromwell is of course a major, yet controversial, figure in Irish and British history. And this incident in Drogheda still has resonance to the present time.

Eamonn Quinn in Louth Contemporary Music Society made me aware of the connection between these two tragic events when he heard Vegar Vårdal and me perform the traditional pols dance that, according to the local tradition, the devil himself played on his fiddle up in the steeple of the Grue Church as it burnt down. It is a jolly, almost ironic dance tune in a Major key. Other popular expressions at the time dealt with the tragedy, like the songs that described the fire, one of them with one verse for each of the victims!

The composition it self is not meant to be descriptive in any way, but the two church fires, and how these events have been used in traditional/popular culture, in philosophy and politics, has followed and inspired me through the compositional process. I dedicate this piece to the innocent people killed in Drogheda in 1649 and in Grue in 1822.

The piece is written upon commission by Louth Contemporary Music Society/Eamonn Quinn with support from Norsk komponistfond. 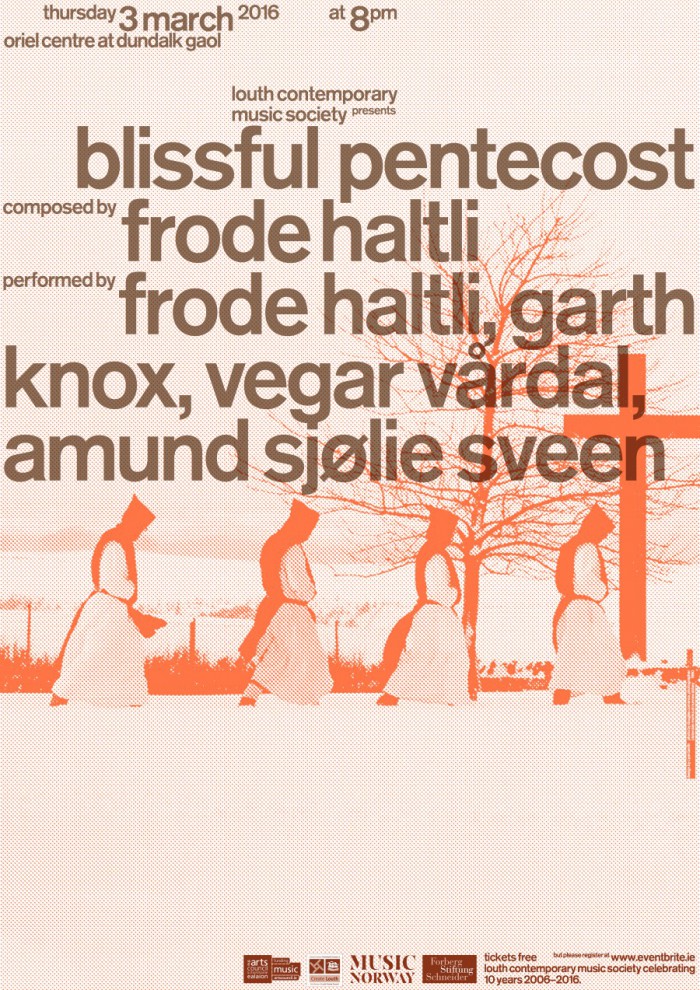